What does Las Vegas have to do with riding my Harley? Nothing. Except I managed to visit both the local Harley-Davidson dealership and the Arlen Ness dealership. Wow.

The H-D dealer was larger than what I’m used to, so of course they had more bikes to ogle at. The used bikes were actually priced pretty well. When I’ve looked at used bikes, they’re mostly the same price as new – so why bother. I got a chance to check out some of the colors I’ve been looking at and the different models. I do keep coming back to the Heritage Softail, but my color choice keeps changing. When I first started, I didn’t like red bikes, I liked silver and black. Then I started lusting after the Denim Red on the Street Bob. Now they’ve got Red Hot Sunglo for the Softail, which has grown on me. They’re also coming out with a two-tone Merlot Sunglo/Cherry Red Sunglo which I want to see before I decide. 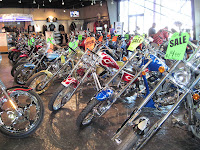 I also got a chance to visit an Arlen Ness dealership. I know the name, and have seen some of the custom bikes in online and in magazines, but I’m still pretty ignorant about the company. The custom bikes in the showroom were amazing. Hard to believe you could just walk in and buy a bike like that. Even got to go tour the back shop, the car bay, and the fabrication shop. Not as big as the Harley dealership shops that I’m used to, or maybe it was just laid out differently. Either way, the guys back there were awesome to talk to. Reaaly good guys. Fun to see the projects they were working on. 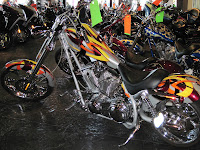 Of course the weather in Vegas is driving me nuts. Ninety degrees, sunny, and very little wind all week. Can’t believe there aren’t more bikes on the road. I’d be riding every day of the year.

And I decided that one of my bucket list goals now is to ride a motorcycle down the Las Vegas strip at some time. Not next year, but perhaps within five. Gonna be a big trip to make that happen, but it would be very cool.