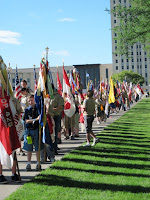 The local Boy Scout council held their Centennial Celebration at the North Dakota state capitol this weekend. Nearly 3,000 Scouts were going to camp out on the capitol grounds. I heard it took special legislative approval to make that happen, and I wouldn’t be surprised by that. Never happened before and probably won’t happen again. My son was riding with his troop but I wanted to see if I could meet with some folks out in Bismarck, so I rode out a bit early.

It’s a ride I’ve probably done a dozen times now. Really nothing special about it anymore. Two hundred miles due west with rest areas every 50 miles or so. Other than a stop at the Harley dealer in Jamestown, nothing really remarkable about the ride. Except the wind perhaps. It wasn’t blowing especially hard, but the angle must have been what made it a bit interesting. My jacket (and all the junk in the pockets) kept slapping me so when I was done it felt like I’d been in a boxing match.

I also stopped at the Harley dealer in Mandan and picked up a new pair of sunglasses. They’re an exact replacement of the ones I bought last year whose foam had peeled off over the winter. That dealership is the only place I know of that sells that brand of sunglasses (not Harley, Global Vision actually). I’m sure there are other places, I just haven’t found them yet. Was glad to have shades again. The glasses I had been using were my clear, night ones and offered no sun protection.

I arrived at the capitol and had no idea how I was going to find my guys with all the folks pulling in. There were two other major events going on at the same time: a memorial/viewing of a popular former governor (Art Link) and a visit by the US Secretary of Transportation. Lots of stress for Capitol Security that day, I think. Somehow the troop pulled in just a row away from where I parked and it was no problem getting through registration with them. Well, I guess I did have to go chase down the Scoutmaster with my health form that needed to be turned in.

After registration it was a matter of pulling the bike closer to the camping area and unloading her. Had to park her in a different area a bit away from the tents, but I was okay with that.

The weekend was fun and a but surreal for me since I spent plenty of time on the capitol grounds in my former job. To see it turned into a campground was just strange.

After a great weekend, of which I spent a bit of time hamming it up with my radio friends it was time to pack it up and head home. Had loaded the bike up with my gear before the Sunday morning service and then helping the National Guard tear down the big tents. As I walked toward my bike, saying my goodbyes to everyone, I found a crowd of 4 or 5 boys standing around the bike. Happens every time at Scout events. So I spent a bit of time talking to them and showing them around the bike.

A couple of errands before I left town. There’s a killer bakery in Bismarck that makes the best bread. Been tempted to ride out there just to load up. So I stopped by and picked up a loaf. Only one because that’s all I had room for. REALLY need to get those saddlebags! Cashier and I were commenting on my bread and water rations. LOL

Last thing to do was fill up with gas. So I stopped at the station and pumped in … a half-gallon? WTF? Checked the speedo. Nope, showing 123 miles since the last fill. But the tank was full. Paid the $1.66 and realized that I had filled up on Friday but forgot to reset the trip mileage. Doh! Gotta pay attention to that. It really does mess me up.

When I left Bismarck, there was little to no wind. Ten miles out of town it was blowing as usual. Twenty miles out of town I started getting hit by gusts that would push me across the lane. Apparently the wind speed wasn’t all that fast, but I think it went from zero to sixty in 4.0. Those gusts followed me all the way home. Bit like dancing out there.

Did stop halfway home at McDonalds. Needed to get gas there anyway and the rest of the troop was going to stop there and I possibly could run into them. Caught just a couple who were finishing up as I was waiting for my food. The rest had left already. And speaking of things that happened while I was waiting for my food…saw a guy wearing a Hoka Hey Challenge t-shirt. Eventually he came over and started up a conversation. Was telling me about the Hoka Hey, which I had heard about but hadn’t really looked into before. He must have been involved in it some way. Should have gotten his name. But he was telling me about the Challenge and some 19 year-old gal out of LA that was planning on doing it on a hardtail. I’m going to have to tune in now and follow it on the internet.

Nothing special about the rest of the way home, except that for the first time all weekend I started seeing other bikes on the road. My apologies to all for not returning the waves. I really was hanging on for dear life with those wind gusts. And by this time of the ride my arms and shoulders are pretty cramped up and I don’t trust taking them off the handlebars. I hope you caught my nods though. It was the best I could do.

Next big trip that I know of is Sturgis. But I’ll have to sneak in some joyrides between now and then. While I can survive a week with what I can fit in my T-Bag and strap to the bike, my focus now is getting saddlebags so I can enjoy the trip and maybe bring home a souvenir or two.