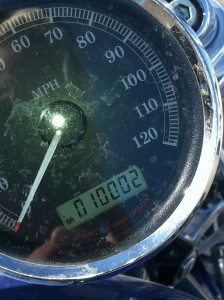 Yesterday I finally tripped over the 10,000 mile mark on the odometer. Proud of that. Not happy that it took so long this year. I had expected that to happen in May, actually. But between the handlebars and cash issues, so be it. At least I can get the pin now. Wondering if I should just have them do the 10,000 mile service again this winter. Can’t say I trust the job that was done last year.

Speaking of which, there have been two things of note recently. In the last few weeks, I’ve finally gotten around to pulling the windshield off and giving it a go without one. First thing I noticed was how much louder it was, mostly because of wind noise. The next thing that struck me, literally and usually in the face, was all the stuff that gets kicked up from the road that I hadn’t really noticed. There’s a lot of construction in town and it seems I’m always behind a truck. After a couple of days of that I said “well this has been fun and I’ve proven I can do it, now put it back on.” That was a couple of weeks ago and I still haven’t gotten around to it. Since I’ve only been riding around town I guess I decided it wasn’t that big of a deal and I’ve gotten used to it. If I ever get out on the road again, I’m sure it will be the first thing I do to get ready for the trip.

The other thing that has happened is that I’ve gotten a bit used to the handlebars. I still don’t like them and will probably swap them out the first chance I get, but I don’t mind them so much any more. Maybe my arms have gotten stronger. Maybe I’ve learned to steer with my butt. Maybe I think the badass look is worth it. But I no longer hate them. However, I still can’t see taking them on a long trip.

Speaking of long trips. I missed Sturgis this year, mostly because of a bigger trip I’ve got coming up in a few weeks – to England. Probably worth it in the long run, but I feel bad that I’ve broken my streak. I heard attendance was down anyway. And no one I know went. I will have to correct that next year.

And I’ve got people on both coasts and down the middle of the country that I’d like to visit on an epic road trip. I need to start making plans to see if and when such an escapade would be possible. I sure would love to put a few thousand miles on the bike in one epic adventure.