I attended the state HOG rally this weekend. It started on Friday, but between the crummy weather and some things I needed to take care of, I waited until Saturday morning to head out to Mandan. The day started out cool (high 40s) and I spent 100 miles in fog. By the time I stopped to fill up I was pretty darn frozen. Took a while to thaw out before I could even fill up with gas. Kind of dreaded getting back out on the road, but there was only 15 more miles of fog before the sun broke through and things improved immensely.

Got to the rally registration just about the time the last of the Mystery Ride folks were leaving. It sounded like fun, but I was a little road weary and hungry, so I skipped out and grabbed a bite to eat. Then I checked into the hotel and took a nap. Didn’t need to be back to the rally until 4:00, so it seemed a good use of the time. 🙂

Later that afternoon, I headed back to the rally to wait for the parade to begin. Bunch of bikes in the parking lot for sure. Waited around for instructions and about all I heard was that once we arrived we were to park on Main Street “Sturgis style.” Glad I knew what that was! They started up the lead bikes and motioned for the rest of us to line up. I wound up near the back, where I wanted to be. I know a lot of folks will say that’s not a good spot, especially for new riders. But I found the parade ride to be easy and a hell of a lot of fun. Because I was at the back, I could look up the line and see bikes as far up the road as I could see. Heard there was about 250 bikes total. Pretty awesome. 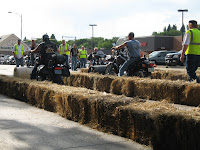 It was a short ride and once we got downtown and parked, they started up the bike games. I’d never seen bike games before, so I was curious what a “barrel roll, ball drop, and circle slow ride” were all about. The barrel roll was first and the object of the game was to push a barrel down a narrow lane without touching the sides as quickly as possible. Of course, the faster you went, the more likely you were to run into the sides. Some of the folks had this down and it was amazing how quickly they got through it. 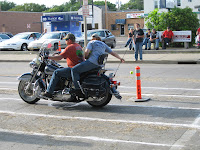 Then it was on to the ball drop. This time you needed a passenger to place tennis balls on the top of traffic cones. Several bikes went through with no luck. Folks were beginning to think it couldn’t be done. Then finally somebody got one to stick. Then a few runs later, someone made two. Then a trike came up (cheater) and got all six to stay. I don’t think it was against the rules as long as his back wheel didn’t cross the line. Anyway, the best effort by a non-trike was three balls that stayed put. It was harder than it looked, and it looked pretty tough.

The last game I have no pictures of because this is where I made a name for myself. I was just standing at the curb waiting for the slow circle rides to begin. The volunteers were having trouble with one of the stopwatches and finally announced that they only had one working stopwatch so they could only run one bike at a time. Well of course I have my iPod Touch in my pocket, so I pulled it out and offered it to them to use as a stopwatch. Gave it to one lady and showed her how to use it. Well, she was having no luck (wanted to really PUSH those buttons on the screen). So I got recruited to run the stopwatch. Next thing I know, I’m timing events and wearing the nice yellow-green vest. Truly no big deal. Do that kind of stuff all the time for church and Scouts. A lot of fun and I got to time the winning run which took 34.3 seconds. Oh, the slow circle ride is a 14-foot radius circle with a 5-foot lane that you have to stay within and ride as slowly as possible. Longest time wins. Most of the runs were under 20 seconds. I think there was only one that was even close to the winning run.

After the games it was time to eat. Lines were long and slow, but the food smelled good. While I was standing in line, one of the event organizers came and thanked me for helping out. He was really grateful. Once I got my food, I sat and talked with a gentleman from Williamsburg, Virginia. He was on his way out to the West Coast and stopped on his way through. Nice to talk to. Have to admit that I was ready to head back to the hotel after supper.

The next morning I got up early to attend the worship service they put on. Curious what that would be like. There was a lady that sang several songs that was pretty good and a short “sermon.” I may or may not bother with attending another one in the future, but I’m glad I went once. After that it was the group photo (funny that the camera didn’t break!), and then on to breakfast. The gentleman (Joe Snell) I spoke to the night before who was thanking me for helping out, found me again and I wound up with a hug, a hat, a pin, and a ribbon. Jeesh. I’ve done a lot bigger volunteer jobs and not gotten even a thank you. And when he got up for his committee member speech at the closing ceremony, he mentioned me again. Enough already!

Breakfast was good and filling. And after the closing formalities, everyone went their separate ways. I headed back to the hotel and wanted to hit the hot tub before I left town. The regular hot tub was being cleaned, so I went to the other hot tub they have. Full of kids and other folks. So not what I needed, so I didn’t stay long. Got dressed, packed up, and headed out.

The day was looking good and I was not in an Interstate mood. Decided to head north out of town and log some roads I’d never been on before. Gassed up in Wilton and took highway 36 from there to Pingree before dropping down into Jamestown. Highway 36 is beautiful. Cows loose on the road, but hey I’m getting used to that. Had to make a stop in Wing. My helmet hurts my forehead when I wear it for over an hour, and after the trip back from Sturgis I’ve got a mark that hasn’t gone away yet. By the time I got to Wing it was hurting so bad I had to take it off. I was distracted by the pain and it was getting to the point where it was dangerous. So I strapped my helmet on the luggage rack, dug out the bandanna, and continued on.

Stopped in Jamestown (about halfway home) for gas, food, and a trip to the dealership. After the miles I’ve logged lately, I have to admit that my interest has shifted from a Street Bob to a Heritage Softail. They had a couple on the floor and I took a good long look. Could be the next ride methinks. Still wasn’t in an Interstate mood and had time enough left in the day to take highway 46 home. That’s the route I took when I first picked up my bike. I was interesting to ride that route now. Soooo different. That first time I was so focused on the bike and how to operate it. This time I was busy looking around and enjoying the scenery. I also knew how far it was between towns and where I could stop if I wanted. This time too, the road wasn’t flooded so I could take it almost to the Minnesota state line. Crossed the border and rode into town from the south for the first time. Crappy roads in Minnesota, but it is the one that runs by my house, so it’s about time I rode it.

I had a serious case of raccoon eyes when I got home, which marks it as a pretty awesome day. Felt good to ride without a helmet and gloves, but as cold-blooded as I am, I never did get the jacket off even though it approached 90 degrees. Might have to get to the desert southwest before that happens. 🙂

I would really like to hit 5000 miles on this bike. So my challenge in the next few weeks is to log some miles at the same time I’m moving. Gonna be tough I think, but I’m going to be so close. I think I can do it though before I have to pack it in for the winter.