Before I begin, let me set a bit of background. In the past year, I’ve lost my house, car, job, and life & health insurance. I’ve had my income reduced 80%. I haven’t played World of Warcraft or been to Starbucks in months. I would have qualified for public assistance but I refused to give up my Harley. They say that without hope, the people perish. Sturgis was the hope that has kept me going over the past several months. I think that gives a feel for what this trip meant to me. I had very little pocket money to spend and I’ve had to viciously guard that to have any at all. But I was going to go come hell or high water (and I’ve seen both). 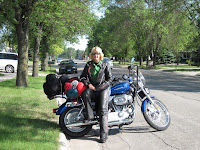 It’s only about 500 miles to Sturgis for me. A good day’s ride, but I chose to break it into two days both on the way down and the way back. So my destination for the first night was Ft. Lincoln State Park just south of Mandan, ND, just over 200 miles away. Custer lived there just before he headed off for the Little Bighorn. I’ve been there before, but had never camped there.

I wasn’t in a hurry to leave and spent the morning packing and preparing the house/kids for my absence. Then I had gotten the message for the job interview just as I had strapped on the leathers and was ready to head out. After a bit of waiting and message leaving, I connected with them and scheduled the interview for when I got back.

I had two stops to make on the way, besides the gas stop. The first was a truck stop that I’ve written about before. Only about an hour west, but anytime I’m passing by I’m going to stop. You gotta vote with your dollars for things you want to see continue. The Tower City Truck Stop gets my vote.

The other stop I wanted to make on the way down was at the Harley dealer in Mandan. I broke my sunglasses two days before and wanted to pick up a replacement pair there. They had the exact pair that I broke, and I really like those so I bought another pair. Did spend a bit of time looking around, but wasn’t interested in dropping any money before the trip even got started. I was still full from the big trucker lunch, so I didn’t grab any food in town. Did gas up before heading out to the state park. 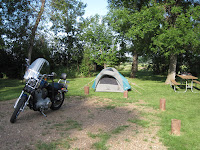 The park is only about 7 miles out of town, but it was the first 2-lane road all day. Felt good to get out of the Interstate traffic. I got there just about the time the park (not the campground) was closing for the day. I was hoping to get some ice cream, but it was a bit too late before I thought of it. No matter. I surely wasn’t going to starve overnight. I set up my camp and had a few hours to kill watching the Missouri river roll by. The campground was fairly full, but I kept thinking how different it was from the place I was going to be camping for the next week. I think there was one other motorcycle, lots of families, some older folks with RVs. Yeah, not the rally crowd.

Rain was predicted overnight and possibly the next day. I learned a long time ago to get animated radar on my phone. So as I tucked in for the night, I watched some rain building to the west and figured I was in for a soggy time. As it was, I woke up at 2am to thunder and lightning, but not a drop fell on the campground. Couldn’t believe that the rain had split. Some went north, some went south, and the narrow dry strip in between was right overhead. 🙂

(Oh, and a consequence of my checking radar was that it drained the phone battery. Spent an hour or two the next morning in the showerhouse trying to get it charged up again. 🙁 ) 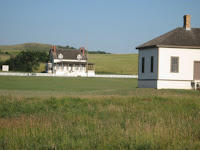 The next morning I hit the road about 8:45am. Got a shot of Custer’s house as I was leaving. I would be in Sturgis by sundown, but I was more interested in getting to Lemmon, South Dakota in time for an Alaska burger at the Alaska Cafe. I tell ya, that burger is nearly worth the 360 miles to go get it. Burger, ham, bacon, onion rings, cheese, sauce, veggies, and I’m sure I’m missing something. Good thing I only get one or two a year!