I had absolutely no plans for the week. Yeah, sure, there were a couple of people I wanted to meet up with, but I hadn’t even made any commitment with them. So Sunday, I wanted to head into Sturgis and wander around for a bit. Got up at a reasonable hour, but apparently so did everyone else. Took quite a while to just get out of the campground, much less get into Sturgis and find a parking spot. Must have taken 90 minutes at least from campsite to Main Street parking spot. And hot, dusty, dry minutes too.

By the time I got to Main Street, the parking spaces were getting scarce. I found one in the center of the street which was pretty easy to get into, and hopefully out of. Hopped off and started walking the streets. As always, lots to see. Mostly t-shirts, of course, but they are always interesting. Having no money, and no space to pack anything home, made the shopping pretty easy – didn’t buy a thing. Did find my favorite rest stop at Temporary Insanity and grabbed a bit of food. Was hoping for an outlet next to the table so I could charge up my cell phone, but none were to be found. But as I was eating, I spotted some folks using some outlets up by the front door and took note to stop by later and grab that spot. 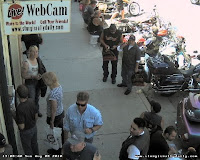 This year I was more interested in looking at bike parts and accessories than most anything else. Haven’t done a bloody thing to my bike yet and that needs to change. Was looking for ideas and options for my little Sportster. Don’t know if I found anything in particular, however. I checked out both Main Street and Lazelle and walked around almost every booth it seemed. Took in a lot of sights, but it seems like everything I want doesn’t work for my bike. 🙁 I did remember to stop by the webcam and send some tweets off to friends while I was there and they managed to capture me in action. 🙂 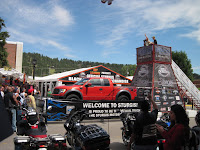 I did manage to make it back to Temporary Insanity for a beverage and got my spot by the outlet, which was good since my cell phone was dying after all those tweets. It was right up by the windows looking out on the street so I had a great people watching spot. It was also right near the photo tower that people use to take the classic shots of all the bikes parked on Main Street. And while I was there, the official rally photographer was up trying to get a pic of the crowd. Worked too. The longer he was up there, the bigger the crowd got. Must have finally got the shot he wanted and the crowd was dismissed. Don’t know what that did for traffic, but it couldn’t have been good.

I suppose it was late afternoon when I finally got tired of walking and decided to head back to camp. Trick was finding the bike. I knew the landmarks I was looking for, but it seemed like forever until I got there. And of course, as I was pulling out of my spot, there was someone waiting to pull right into it.

Back at the campground, I had a slow night that night. I think I walked up to the smaller stage and got myself a drink and sat a spell. Got to talking with a few guys, including one associated with the band playing there. His name was Kyle, but I don’t remember the name of the band. I kind of wore myself out walking around Sturgis, so it was an early night for me. I could hear the concert from my tent, but didn’t walk over to the amphitheater. I should point out here that the only footwear I had along were my riding boots. They are not very comfortable for walking a lot. Really just wanted to get my boots off and put my feet up. My first “wild and crazy” day at the Sturgis rally and The Buffalo Chip campground. LOL

Note: The posts are going to get less chronological after this. A couple of things I want to talk about, but don’t take them as an accurate description of how I spent my time. Editor’s license. 🙂