It absolutely pains me to write this post. Not so much for me, but for my friend. Still my friend. Just not perhaps my mechanic.

I was torn last fall whether to send my bike to my Harley dealer 100 miles from home, or keep it in town at a friend’s custom shop. After a bit of delay in bringing the bike in last spring and my traveling out of town far less than I once did, I decided to keep it in town. I also knew that I needed to replace my handlebars, as my experiences had me believing the stock ones were becoming a safety issue.

I had dropped the bike off last fall with instructions to do the 10,000 mile service and install some mini-ape handlebars. It was probably February before I got a call asking if I wanted natural or synthetic oil for the service. That’s cool. They were working on it at least. 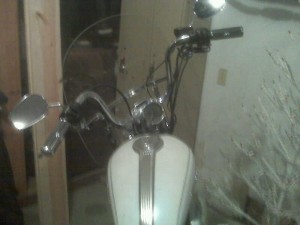 I can’t remember when I started talking to them about the handlebars. It may have been January. What I had in mind was the mini-apes from a Heritage Softail. They seemed to fit me well. I had stopped by the shop to make a payment and I was informed that I might be able to swap bars with someone. I was shown this pic and agreed to the swap. They appeared to be just what I had in mind. As it turned out, the other party decided to sell their bike, not fix it up, so the swap was off. But I thought it was pretty clear what I was looking for.

It wasn’t until mid-March that I stopped by the shop again to make a payment. I asked what the balance was and it was just over what I had planned to make as a payment, so I decided to pay it off. The bike show was in a week or two, so I thought I’d check and see how it was coming along. Had a minor shock because the bike was stripped down and there were these HUGE apes, not mini-apes, on it. OK, the seat and tank were off, so I was sure it wasn’t as bad as it looked, but it took a bit for the heart to return to normal. I spent a fair amount of time at the bike show studying handlebars.

I went back again at the end of the month and the bike was back together. It was less of a shock, but they were still bigger than I had in mind originally. Part of me thought they looked kind of good. And when I sat on the bike, they *were* pretty comfortable. Not sure if I should be nervous or appreciate their confidence in my bad-assery. 🙂

Still a little nervous about these huge bars, I went in on April 9 to go pick it up. Called ahead to let them know I was coming. Got there, and even though they had called me to see if I was still coming in, the bike wasn’t quite ready to go. Bars needed to be fit to me, of course, but they also wanted to run it for a bit to get the fluids moving. Fine. So as I was sitting around waiting for them to do this, I was informed that I had a balance on my account. Having less than $5 to my name, that was a deal breaker. Picking it up was going to have to wait until payday – a payday that hadn’t planned on including a bike payment. To be honest, I wasn’t surprised. I was more surprised the previous time when the balance was lower. I had expected more.

Realize that my bike is my freedom. I really have no other form of transportation. The car I *own* is really my youngest son’s. I have it until he turns 18. And this year I was too broke to get tires for it until my oldest bought them for me. Once it was safe to drive it on snow again, I was too broke to afford gas. Literally, the evening we went to pick up the bike, the car wouldn’t start because there was so low on gas. Once again, oldest son had to come to the rescue and put a jug in so we could start it to finally go get the bike.

OK, this paragraph is going to be difficult for me. I had gone nowhere, and seen no one for what seemed months. In actuality, I probably had been out 4 or 5 times since the first of the year, but two were around the funeral of my aunt. I don’t even go out for groceries. I sit alone in front of a computer at work and I sit alone in front of a computer at home. It costs money to leave the house, therefore I don’t. When I found out I wasn’t going to be able to pick up the bike up, it was like having your parole approved and then suddenly revoked. I wasn’t angry, I was major depressed. A friend I’ve never met noticed that. And stepped in to pay the balance of my bill. They don’t know, nor can I convey here, the difference that made. I suppose it’s like the governor stepping in for a pardon while you’re heading back to death row after the parole was denied. I found it strange that it wasn’t happiness that was the emotion of the day but humbleness. Who am I for someone to do this for me? Can’t say thank you enough. You know who you are.

Within hours I was at the shop to retrieve the bike. It still wasn’t *ready*, so once again I was hanging out a bit before driving it home. They told me that there was something up with the low fuel light and that I should ride it around a bit and see if it would go off. If not, then stop back and they’d look into it. Sure, no problem. I’d probably be back to have them readjust the handlebars anyway. (I don’t trust myself to tighten them down enough or I’d do it myself.)

Took it easy on the way home as the bars are very different from what I’m used to. I was surprised by how quickly the riding skills came back. “Like riding a bike.” Haha. 🙂 But it didn’t take long to realize that the bars needed to be moved forward. No biggie. Made it home through the potholes, sand, flood zones, and traffic with no problems. Parked the bike though and wanted to set the clock. There’s a button on the back of the speedometer that lets you do that. Push, push, push. This feels different. Looking closer, the rubber cover over the button was missing. And looking at the speedo, it looked, I dunno, “different.” But the big *gulp* came when clicking to the odometer and it showed 4,000-some miles. Read this blog. It had over 9,000 when I brought it in. I dunno if they messed with it or put the wrong speedo on, but this HAS to be resolved. And the low fuel light is still on.

Again, it just pains me to say this, but I don’t think a single interaction with my friend’s shop went smoothly. The bill was as expected, finally. But I could find fault with nearly every thing else. I am so disappointed. I really wanted it to work out. But I have to admit that I can’t imagine myself going back. I don’t know if it’s because I’m still a noob, if it’s because I’m too Minnesota nice, or if that’s just the way it is.

I’d usually put an odometer reading here, but at the current moment: ???

UPDATE: It was too cold to stop by the shop on the way home today, but I did call. As I suspected, they also thought they had put the wrong speedometer on my bike. Apparently there was another one just like it that was taken out when a custom one was installed and they got them mixed up. Easily corrected, but still. I’ll get it taken care of as soon as it’s warmed up a bit.

In 2009, I put the Harley in storage in late October after a couple of cold, wet weeks. Of course, then November was absolutely beautiful and I regretted putting it away so soon. So I swore I wasn’t going to park it until the end of November this year.

Well, it was a beautiful fall, but by mid-November it was obvious that it wasn’t really the cold that was interfering with riding, but the short days. I rode as much as I could, even if it was only around town. But by Veterans Day (November 11), I decided that was it. Even if it got absolutely summer-like out, I wasn’t going to be able to take advantage of it anyway.

This winter I decided to store my bike at my friend’s shop (Road Wolf). I wanted to keep it in town and I was hoping to get some work done on it too. Had a nice chat when I dropped it off, but it still feels weird leaving the keys in the ignition and walking away. 🙁

So over the winter I’ve had the 10,000-mile service done even though it hasn’t quite gotten there. Seems silly to wait until Spring, take it for two rides and then bring it back in for service. The other thing I desperately want done is to swap out the handlebars. My arms frequently go numb when I’m out for a ride. Worst situation was when I was coming back into town once. Dropped my left hand for a wave and couldn’t get it back up to the handlebars. And of course right about then I’m coming up on a pickup which is slowing down for an intersection. Really needed to get my hand on the clutch. Desperately. Somehow made my dead arm obey, but it was a really dangerous situation. As of today, I’ve ordered some 12-inch mini-apes and I’m looking forward to seeing how much different they are to ride with. A small part of me is worried the bike will be harder to handle, but I do know that the stock buckhorns needed to go.

In one month will be the local bike show. Last year it marked the beginning of the riding season. I hope the same is true this year, but we still have a few feet of snow on the ground and a major flood ahead of us. Time will tell when I will begin riding again. But at least this year I don’t have to wait to have it hauled in from out of town. The first nice day, I can just head over and set it free.